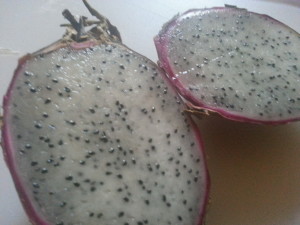 item. I couldn’t look away, let alone pass it by. As soon as I saw the sign reading Dragon Fruit (ignoring the crazy expensive $9.99 lb price tag below it), I grabbed two and decided I’d figure out what to do with them later.

That evening I looked them over and it was clear that I needed to keep that gorgeous, scale-like rind solid for a colorful bowl to hold some vanilla ice cream. So I carefully scooped the insides out and chilled the exterior in the fridge. The rest I decided to bake into cupcakes to accompany (and to be eaten on their own).

Attempting to create a makeshift cake flour, I accidentally grabbed the cornmeal instead of the cornstarch. The result of the first batch was really strangely edible — a tasty unholy spawn of cornbread and cupcakes that were best left unfrosted and eaten as a decadent breakfast muffin.

With actual cake flour in hand, I tried again and the result was delicious! The cake is airy with just a hint of being more than mere vanilla, both in taste and in appearance with those tiny black flecks. My frosting — which included a dragon puree 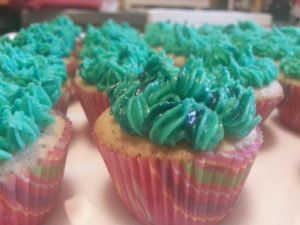 reduction and some liquid dragon fruit,  came out way too sweet for full-sized cupcakes (or “motherships” as Taran called them), but seemed to work for the bite-sized mini cupcakes, though it was somewhat droopy in consistency.

All told, taste-wise, the plate came out to my satisfaction. I saw that the ice cream looked a little plain, so I added melted some semi-sweet chocolate, mixed in chopped pretzels and dried cranberries, then spread it out and froze it, breaking it into bark for garnish.

But there was still that not-quite-right frosting. So, I tried again, leaving the cupcake batter as it was, but tinkering with the frosting to get a thicker consistency — paring it down to a simple mix of butter, sugar and basic dragon fruit puree, leaving out the vanilla extract and my initial attempt at a reduction. I’m really pleased with how these have turned out! I’ll likely play around with the coloring in the future, but the taste is just right. 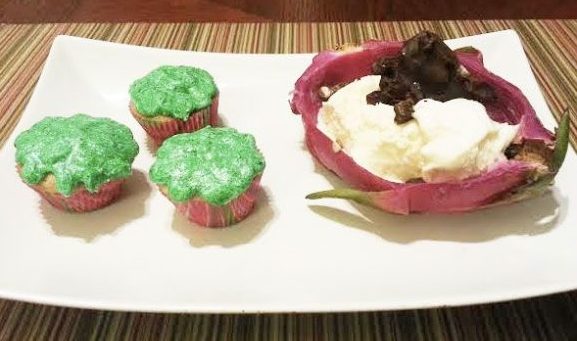 The recipe for the cupcakes is as follows, with a yield of 48 mini cupcakes.

And the recipe for the frosting is: 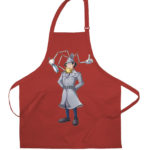 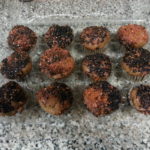