Marriage is What Brings Us Together Today

There’s nothing quite like attending someone else’s wedding to get you motivated to plan your own. Or, in this case, being challenged by a fellow attendee.

Our friend (and wedding party member) Marc cornered us at our officiant Tony’s wedding in September 2016.  He had just mentioned to Jason (another of our wedding party) that “Robin & Taran are next” in terms of unmarried members of a group of close friends affectionately referred to as “The Framily.” Soon Marc was confronting us, indignant. He had just been told that, technically, Taran and I are already married. First we had a non-binding commitment ceremony in Bali that escalated to an “accidental wedding,” then we went to City Hall last year with Jason so that we could benefit on our taxes.

The reaction wasn’t unusual; in fact, it was mild compared to some. Family and friends have not been shy in expressing disappointment not to have been invited  to either, and we have consistently assuaged those feelings by promising that the plan, eventually, was to have a real wedding. We told Marc this. That’s when the gauntlet hit the floor. 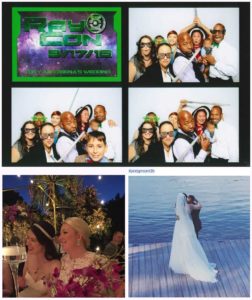 Word has spread, it seems, of my penchant for planning detailed events like birthdays, memorials, themed dinner parties. Marc’s expectations of what our wedding would mean within this context was like a switch flipping in my noggin.

Health prevented me from attending the next wedding on our calendar. I had been looking forward to my former work colleague and forever friend Germain’s event of course for sentimental reasons, but for recon, as well. Then in November we were in Palm Springs, CA, where we attended the wedding of Taran’s childhood friend Caren and her now wife Courtney.

These events (because of course I stalked Germain’s wedding online) were the perfect storm of inspiration and motivation. Tony & Zeena infused fandom into their wedding in some smart ways. Germain & Jayne also had some film geek qualities, and forced me into deep thinking with their catchy-as-hell/bar-setting wedding hashtag (#jandgmeant2b), and Caren
& Courtney achieved a genius balance of classic, modern and local elements, as well as offering a smart example of conducting a same-sex wedding.

Throughout December, Taran and I talked about our hopes for our big day, what was important to each of us as individuals and how we wanted to present ourselves as a couple.  Three months later, it’s actually officially happening. We have a venue, we have a date (well, we always had a date, just not a year), we have a remarkable collection of friends and family willing to help us pull this thing off, we have a chunk of stuff already done and even more irons in the fire.

We met with Tony yesterday to truly invite him to join our journey. In the course of describing what we want to do, he repeatedly suggested that we should film the process for a future TLC show. “Our weird-ass wedding” was, I think, the name he and Taran came up with. Shy a camera crew, I decided to start documenting (and ret-conning) what’s going into making this happen. In 1 week and 1 day we’ll be 1 year away from checking into our bridal suite. Seems like as good a time as any to start. 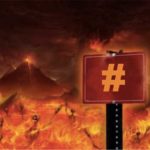