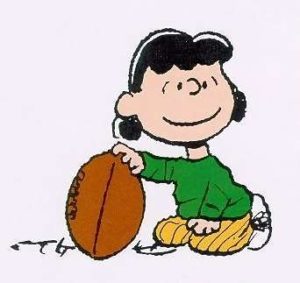 A good friend of mine is an intense football fanatic. Once the season starts, it’s just known that he’s unavailable on Sundays until the Super Bowl has come and gone. He takes his fantasy football team seriously, too. He’s won a few leagues and not just a small amount of money.

Today, I had the rare opportunity to see his Sunday ritual up-close and personal. As soon as he got into the apartment, he had the remote in his hand and his eyes were glued to the screen.

As serious as he is, he’s got a great sense of humor. In his honor, Taran and I came up with a mock game of our own. He loved it so much, he printed them out and dubbed them the house rules.

Here are the ten ways we came up with to lovingly tease him while he’s in his bliss:

1. Yell “Touchdown!” every time a receiver catches the ball.
2. Get indignant that the ref isn’t calling “Traveling” every time a team runs the ball.
3. When a player makes it to the end zone, shout “Safe!” (with exaggerated umpire arm gestures)
4. Consistently refer to the teams by the wrong names. “The Indianapolis Ponies,” etc.
5. Figure out who’s on their fantasy football team and actively root against them.
6. Ask who’s performing at the half-time show, and keep hoping it’s Adele.
7. Parrot what the commentators say, but present it like we’re sharing a completely new and novel piece of information.
8. Add flavorful commentary a la “Dodgeball” and keep calling them “Cotton” as we shove an imaginary microphone under their nose.
9. Intermittently stand up and perform old high school cheers. “Be aggressive! Be be aggressive!”
10. Ask on Every. Single. Play. “Is that a blintz?”